Apple is famous for its obsessive care for design and manufacturing, and its new, much-hyped watches are no exception. But, ironically, the watch can only be created by introducing errors into exquisitely crafted materials.

One familiar material used in Apple’s latest device is silicon, the bedrock of all modern electronics. Engineers first must purify silicon so that fewer than one in a billion atoms are impurities (that is, anything but silicon). They do this using a technique called zone refining, where the material is melted bit by bit, with impurities collecting in the moving molten area, or by converting the silicon into a compound that can be purified by distillation, and then decomposing it back to purified silicon. The ultrapure silicon is then grown into a boule, a single cylindrical crystal that’s up to six feet (2 meters) long and 18 inches (45 centimeters) in diameter. Except for the rare impurities and the physical limits imposed by entropy, every atom in the boule is precisely placed with respect to its neighbors. That precise arrangement is crucial for the next step: introducing carefully controlled concentrations of impurity atoms (known as dopants) to tune the electrical properties across the surface, creating the semiconductor devices that make up an integrated circuit. These steps are carried out at tightly managed fabrication facilities marked by “bunny suits,” positive pressure, and air-purifying filters, all designed to keep any contamination (other than the desired ones) away from the silicon-based integrated circuits.

The Apple Watch employs a similar strategy of incorporating errors to make a different material, one that’s less familiar in the world of gadgets. In this case, to make the metal cases of the watch harder and more durable. This is especially true for the watch cases that are made of gold, famously soft in its pure form. Besides shine, one of the things that makes the metal instantly recognizable is its ductility, that is, its ability to be deformed without breaking. In order to understand how Apple makes its gold watches, we need to understand something about how metal bends.

For a solid to change its shape the atoms that make it up must change their relative positions without coming apart. The hardness of metals—the resistance to deformation—is a function of how hard it is for atoms to move past each other. In metals, this movement happens by a process called slip. Metals are usually crystalline, with atoms packed together like oranges in a crate. (Even though atoms are actually quantum clouds of probability, for the purposes of studying solids, it’s useful just to think of them as hard spheres.) Amongst the neat rows are dislocations—linear defects where extra rows of atoms are jammed in to what would otherwise be an orderly crystal structure.

Imagine the crate of oranges with 20 rows of oranges stacked up in the bottom half of the crate, but with 21 rows in the top half of the crate; at the junction between the two halves, there is a line of dislocation where the rows do not match up. Because metal atoms bond to each other without regard to direction, this extra line of atoms provides an opportunity. When the atoms are pushed, by applying mechanical force to the object, the dislocation can move, as the line of ”extra” atoms bonds briefly with new atoms in front of it, leaving perfectly matched rows of atoms in its wake. When the extra line of atoms gets to the end of the ”crate,” the overall shape of the pile (the shape of its outside) has changed. Multiply this process by millions, and you get the deformation of metals. The movement of dislocations means that applying mechanical force results in a permanent change in the shape of the object as the atoms in the dislocation find new atoms to bond to. Importantly, anything that makes it harder for the dislocations to move makes the metal harder to deform, meaning that more force has to be applied in order to cause slip.

The most well-known strategy for hardening metals is alloying. Pure gold is soft enough that even thick pieces can be easily bent by hand, so gold used for jewelry is normally alloyed by adding other metals. In the case of the yellow and rose gold Apple Watches, these include silver, copper, and palladium (and possibly other metals too; Apple isn’t exactly forthcoming with their proprietary compositions). Twenty-four-karat gold is entirely pure, while in 18-karat gold, alloying atoms account for around 25 percent of the metal’s mass (six parts out of 24; it can legally be a bit less than this, but not more). These impurity atoms get in the way of moving dislocations. Without the alloying atoms, the gold atoms in the dislocation would happily unbind themselves from a row of gold atoms and on to the next one. But a larger or smaller atom in the same spot provides a barrier that makes it hard for the dislocation to pass over. Think about how much easier it is to slide two smooth pieces of metal across each other than two surfaces that are bumpy (except that, with atoms, the peaks and valleys are more like differences in energy than in space). So alloying makes it harder for dislocations to move, which makes the metal harder.

The act of applying mechanical force to metals not only causes existing dislocations to move—it also causes new dislocations to sprout in the metal. The new dislocations run into and interfere with each other, and anything that gets in the way of the movement of dislocations (including other dislocations) makes the metal harder. Bending metal to get this effect is called work hardening, and you can feel it yourself by unfolding a paperclip and then bending it back and forth at a single point—it will be easy at first, but then will get more difficult as more and more dislocations appear and interact with each other. Because the dislocations are lines that are effectively only one atom thick, that bent-up paperclip can include hundreds of feet/meters of dislocations, in much the same way that the nucleus of a human cell, only about 6 micrometers in diameter, contains strings of DNA that are nearly six feet (two meters) long when uncoiled.

In the case of the Apple Watch, the alloyed gold is cast into ingots. The ingots are then milled into precise blocks, and then work hardened by passing them between two rollers over and over again, squeezing them a little each time, deforming the ingot into the flat sheets that will then be machined into blanks, and also hardening them in the process.

The gleaming perfection of an Apple Watch comes from materials that incorporate precisely controlled flaws. By combining several different kinds of errors, Apple endeavors to create a device that approaches perfection.

You can watch detailed videos of Apple Watch manufacturing here (see the video about gold used in the watch below), and here’s a more detailed breakdown of the manufacturing processes shown in the videos.

Debbie Chachra is an Associate Professor of Materials Science at Olin College of Engineering. 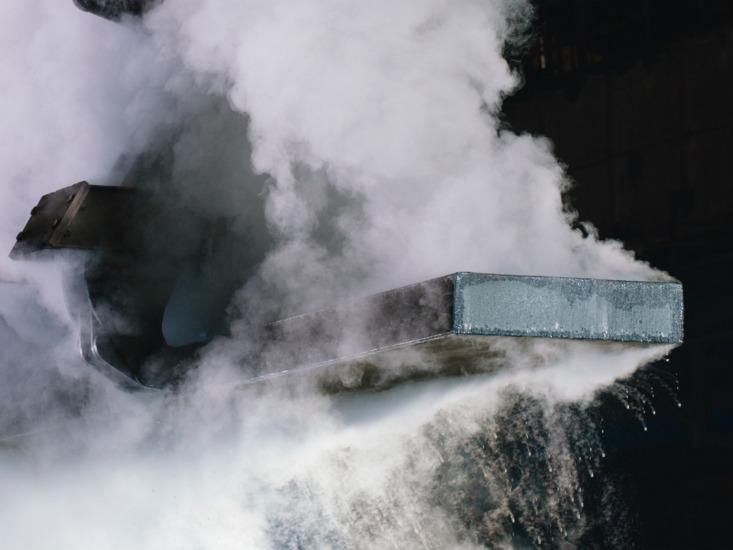