In the early 1950s, the U.S. Air Force Supply Depot in Ohio was looking for a faster way to store and fetch information from its sizable inventory. They had 50,000 items in their records and wanted instant access to each one of them. The dominant storage technologies of the time—punch cards, magnetic tape and magnetic drums (and filing cabinets)—were unreliable and slow. The information on magnetic tapes, for instance, was largely sequential, and one could wait seconds, minutes, or more for the roll to unravel to the right point. Even the depot’s expensive mainframe computer had a huge lag time since it collected lists of the depot’s parts count and then processed it in batches. As data piled up between the processing batches, the computer records were out of date.

The Air Force sent a request to IBM, soliciting a bid for a “material information flow device.” Coincidentally, IBM had recently set up an advanced research lab in San Jose in 1952, partly to look into ways to speed up information storage. The problem simmered in IBM’s satellite lab in what would soon become Silicon Valley, but was then still dotted with orchards. After a few years of brainstorming and design tweaking, IBM announced the release of the world’s first disk drive in 1956. It was called the RAMAC (Random Access Memory for Accounting and Control) 350, and was housed in the new RAMAC 305 computer. In the press release, IBM promised an “entirely new machine” that stored “millions of facts and figures less than a second from management’s reach.”

The world’s first hard disk drive looked like a giant spool of sewing thread. Fifty aluminum platters were stacked on top of each other, each an inch thick and 24 inches in diameter, separated by a gap of about a third of an inch. The platter faces were covered with magnetic iron oxide, which stored the data. It packed about four megabytes, roughly the amount of information in the King James Bible. Motors whirled the platters around twelve hundred times a minute and drove arms in and out between the platters to store and fetch data. Because of its appearance, some IBM engineers called it a “jukebox”; others, a “meat cutter” or a “baloney slicer.”

A company that sold paper stock, including the kind used for punching cards, bought the first RAMAC. And in 1960, IBM got an opportunity to show off the technology to a much wider audience, when it hauled the RAMAC 350 to the Squaw Valley Winter Olympics to tally the results. Twenty six dedicated technicians accompanied the machine, a sizable retinue of coaches for one burly 8,900-pound athlete. The RAMAC 350 was competing in its own event: to record and deliver game results faster than any system before.

The hard disk drive was a complicated, gigantic piece of hardware, but it was also an elegant and a well-engineered synthesis of two very powerful concepts. The first idea is that all information—words, numbers, music—can be broken down and coded with just two different characters. It’s a concept that is peppered across history in various forms. In 1605, Francis Bacon, the English philosopher and scientist, coded all letters of the alphabet using a combination of five As or Bs. Morse code, the foundation of the telegraph, uses a series of dots and dashes to represent numbers and letters. Even the I-Ching, a classical Chinese text of divination written thousands of years ago, involves a coding system based on just two characters: unbroken (yang) and broken (yin) lines. Stacking six such lines gives 64 possible combinations; the combinations have different meanings, which are used in I Ching divination. This arrangement served as inspiration for mathematician Gottfried Leibniz to develop a way of representing information using two numbers, 1s and 0s. This binary system is how we store digital data today, as long strings of only those two numbers.

The other idea was that magnets could store data. In disk drives like the RAMAC 350, a coating of magnetic material on spinning platters is divided into millions of tiny regions. Each region, or domain, has a magnetic field that can be in two states, a 1 or a 0—one “bit” of information.

In a hard drive, magnetic fields are finely controlled by electrical currents. It’s a concept which has its origins in an accidental discovery. In 1820, Hans Christian Oersted, a Danish physicist, found  that an electric current deflected his nearby magnetic compass needle. Hearing of this discovery, Michael Faraday, an English physicist, set up his own experiments and found that magnetism and electric current had an interchangeable effect. He coiled two wires around a magnetic iron ring and ran current through the first coil, which caused a current to pass through the second coil, too. Faraday realized that the current through the first wire had created a magnetic field in the iron ring, and this field had in turn set off an electric current on the second wire.

This forms the basis for magnetic recording. In hard disk drives like the RAMAC 350, a needle swings over the spinning platter, going from its center to the edge. When an electric signal goes through the magnetic head at the end of the needle, it induces a magnetic field. As the platter moves, the particles in each domain align with the magnetic field from the tip of the head. So the particles on the disk get coded as either 1s or 0s, depending on the direction of the field. Information can thus be stored in the magnetic fields within each domain on the platter. Reading is essentially the reverse process: The disk spins, the head is affected by the moving magnetic field below it, and the direction of the field is indicated by the flow of current in the head. Depending on the orientation of the magnetic field, it induces an electric signal that can be read as a 0 or 1.

Over the years, engineers kept making hard disks with more memory, coming up with ever more clever tricks for encoding the information. For instance, as the tiny magnetic domains became even tinier, the signal from the domains to the read head became ever more degraded. So, in the late 1980s, to make a better read head, engineers sandwiched two thin magnetic layers around another metal. If the magnetic fields in the layers are oriented in opposite directions, electrons don’t flow between the layers very easily, like someone stuck between crowds rushing both in and out of a train car. This is read as a 0. If the fields in these layers have the same direction, they offer less resistance; this is read as a 1. The first hard disk drives with these thin film “magnetoresistive” heads shipped in 1991. By some estimates, magnetoresistance enabled a 20,000-fold surge in disk drive capacity. With many more nifty tweaks to this model, manufacturers can now store terabytes of data in the modern hard disk drive that fits in the palm. But the principle remains the same as in the RAMAC: coding information in 1s and 0s, and using magnetic fields to store those 1s and 0s. (Floppy disks, which would come around later, used the same basic methods as hard disks. Optical discs, like CDs, store information optically instead of magnetically.)

In 1960, when IBM’s engineers put these principles to test on the mountaintop in Squaw Valley, the machine occupied most of a dedicated building at the Olympic village. Its consoles resembled a modern laundromat. Over a million feet of cable connected the ski slopes and skating rinks of the Olympics to the data-processing center. IBM’s engineers had already fed instructions to the RAMAC’s memory to calculate scores from 26 events, some of them requiring a tallying of speed, distance, and style points.

The RAMAC shined. Event scores were printed out within seconds, instead of hours as in previous Games. The computer automatically sent the data to judges and the press by teletype. People could get the results at the Olympic Data Processing Center from every event, almost in real time. Olympians crowded the control room to look at the new machine. Walter Cronkite stood next to the RAMAC as he relayed results on CBS. It’s hard to believe that a storage device could create such a buzz, but there it was. Some years later, Khrushchev stopped by the RAMAC plant during a visit.

When IBM announced the release of the RAMAC 350, Thomas Watson Jr., the CEO of IBM, claimed it was “the greatest new product day in the history of IBM and, I believe, in the history of the office equipment industry.”

In reference to the 350 in particular, that’s quite a stretch. But in terms of the new technology it introduced, Watson had a stronger argument: Hard drives would go on to assume a central role in the meteoric rise of computer technology. And despite the long-projected demise of these “marvelous mechanical whirling dervishes,” disks coated with magnetic material are still today’s dominant store of information.

Venkat Srinivasan is a science writer based in San Francisco. He tweets @vns2. 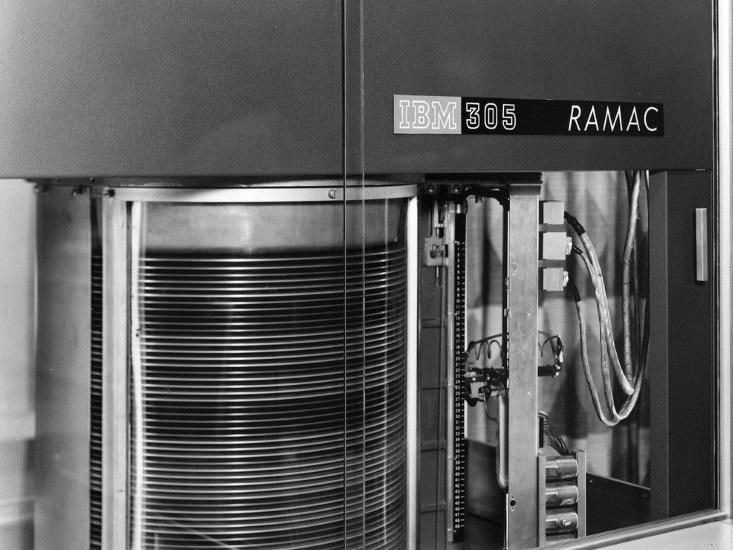 The anatomy of everything