Let’s play a game. I’ll show you a picture and a couple videos—just watch the first five seconds or so—and you figure out what they have in common. Ready? Here we go:

Did you spot it? Each of them depicts the exact same object: a shiny, slightly squashed-looking teapot.

You may not have thought much of it if you saw it in that episode of The Simpsons, in Toy Story, in your old PC screensaver, or in any of the other films and games it’s crept into over the years. Yet this unassuming object—the “Utah teapot,” as it’s affectionately known—has had an enormous influence on the history of computing, dating back to 1974, when computer scientist Martin Newell was a Ph.D. student at the University of Utah.

The U of U was a powerhouse of computer graphics research then, and Newell had some novel ideas for algorithms that could realistically display 3D shapes—rendering complex effects like shadows, reflective textures, or rotations that reveal obscured surfaces. But, to his chagrin, he struggled to find a digitized object worthy of his methods. Objects that were typically used for simulating reflections, like a chess pawn, a donut, and an urn, were too simple.

One day over tea, Newell told his wife Sandra that he needed more interesting models. Sandra suggested that he digitize the shapes of the tea service they were using, a simple Melitta set from a local department store. It was an auspicious choice: The curves, handle, lid, and spout of the teapot all conspired to make it an ideal object for graphical experiment. Unlike other objects, the teapot could, for instance, cast a shadow on itself in several places. Newell grabbed some graph paper and a pencil, and sketched it.

Back in his lab, he entered the sketched coordinates—called Bézier control points, first used in the design of automobile bodies—on a Tektronix storage tube, an early text and graphics computer terminal. The result was a lovely virtual teapot, more versatile (and probably cuter) than any 3D model to date.

The new model was particularly appealing to Newell’s colleague, Jim Blinn. One day, demonstrating how his software could adjust an object’s height, Blinn flattened the teapot a bit, and decided he liked the look of that version better. The distinctive Utah teapot was born.

The computer model proved useful for Newell’s own research, featuring prominently in his next few publications. But he and Blinn also took the important step of sharing their model publicly. As it turned out, other researchers were also starved for interesting 3D models, and the digital teapot was exactly the experimental test bed they needed. At the same time, the shape was simple enough for Newell to input and for computers to process. (Rumor has it some researchers even had the data points memorized!) And unlike many household items, like furniture or fruit-in-a-bowl, the teapot’s simulated surface looked realistic without superimposing an artificial, textured pattern.

The teapot quickly became a beloved staple of the graphics community. Teapot after teapot graced the pages and covers of computer graphics journals.  “Anyone with a new idea about rendering and lighting would announce it by first trying it out on a teapot,” writes animator Tom Sito in Moving Innovation. “We saw the teapot rendered as if made of alabaster, red brick, leopard skin, and animal fur.” Most famously, a 1987 paper introduced an image casually described as the five Platonic solids plus the “newly discovered Teapotahedron.”

These days, the Utah teapot has achieved legendary status. It’s a built-in shape in many 3D graphics software packages used for testing, benchmarking, and demonstration. Graphics geeks like to sneak it into scenes and games as an in-joke, an homage to their countless hours of rendering teapots; hence its appearances in Windows, Toy Story, and The Simpsons. (I myself, while wrestling with an unruly graphics project, once posted to Facebook, “HOW HARD IS IT TO DRAW A @#$%ING TEAPOT???”)

Over the past few years, the teapot has been 3D printed back into the physical world, both as a trinket and as actual china. Pixar even made its own music video in honor of the teapot, titled “This Teapot’s Made for Walking,” and a teapot wind-up toy as a promotion for its Renderman software.

Newell has jokingly lamented that, despite all his algorithmic innovations, he’ll be remembered primarily for “that damned teapot.” But as much as computer scientists try to prove their chops by inventing clever algorithms, test beds for experimentation often leave a bigger mark. Newell essentially designed the model organism of computer graphics: to graphics researchers as lab mice are to biologists.

For the rest of us the humble teapot serves as a reminder that, in the right hands, something simple can become an icon of creativity and hidden potential. The original artifact now resides in a place of honor at the Computer History Museum in Mountain View, California. Its utterly pedestrian form seems almost out of place among the abacuses, mainframes, game controllers, and other computing gadgetry that dominate most of the exhibits.

If you watch closely, you’ll be sure to spot it in a film opening soon near you.

Jesse Dunietz is a Ph.D. student in computer science at Carnegie Mellon University. He’s written for Motherboard and Scientific American Guest Blogs, among others. @jdunietz. 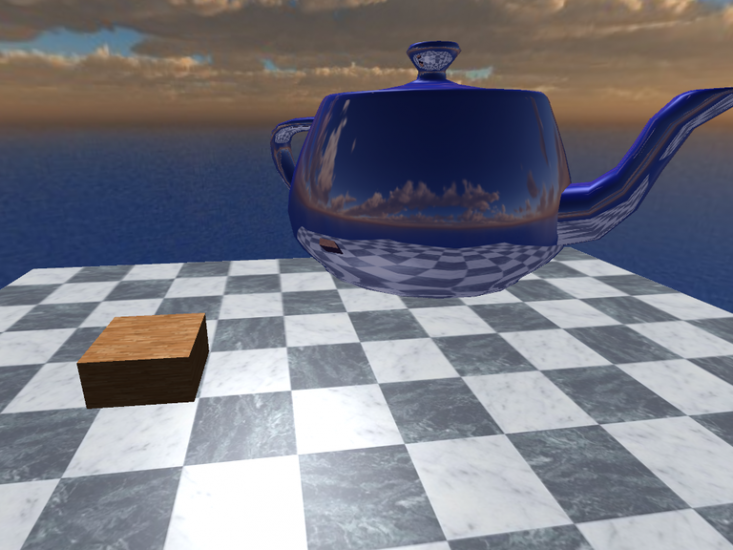